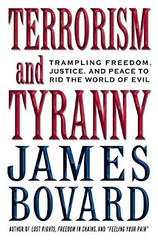 Terrorism & Tyranny: Trampling Peace, Freedom, and Justice to Rid the World of Evil

American Lawyer: "Bovard's take is ... a far more detailed and wide-ranging assault on the Patriot Act and the Bush administration, dense with example after example of governmental oppression, folly, and ineptitude in the wake of 9/11... Bovard is a superb reporter... He has apparently read just about everything published, in both the traditional and alternative media, about the egregious conduct of government officials, investigators, airport screeners, and bureaucrats everywhere in the last two years... Bovard offers far more than an infuriating record of government misconduct. His is a libertarian critique of any government's-including ours-inherent tendency to aggrandize and abuse its power."

Boston Globe: "Terrorism and Tyranny is a scathing account of the war on terrorism... Bovard is a bipartisan scourge... His lively fury at government incompetence keeps the pages turning quickly... Most riveting." (Edmund Carlevale, February 1, 2004)

Washington Post: "Bovard has the virtue of ideological consistency.... Government - whether in the form of the tax man, the G-man or the OSHA inspector - is a Leviathan to be feared and restrained.... He ties his libertarian critique of the domestic war on terror with a critique of the Bush administration's foreign policy.... To Bovard, our problems stem from our foreign policy. To stop terrorism, he advises, we ‘should cease meddling in the affairs of almost every foreign nation on earth.'" (September 28, 2003)

Karen De Coster, Mises Institute: "Jim Bovard is, without a doubt, the best political researcher-writer in politics today.... He provides an encyclopedia's worth of timely quotes laid out in chronological fashion, to funnel the reader through an extensive framework of US government double-dealing, coercion, corruption, and propaganda milling... Bovard has mastered the art of uncovering deception and spin when and where it is buried beneath a stack of establishment posturing, legally binding decrees, and walls of near-impenetrable propaganda."

Washington Times: "Bovard, one of the most trenchant and effective critics of the runaway growth and abuse of big government during the Clinton-Gore years, has now turned his heavy guns on the even greater expansion of government power after 2001... Bovard's new book comes as an important counterweight to the cult of secrecy and big-government empowerment that has run amok over the past two years... The author has synthesized and organized a vast amount of information, yet he presents it in an accessible, reader-friendly way. It is rare to read such a well-documented study that flows so smoothly.... Terrorism and Tyranny" is a timely, troubling book, exhaustively and impeccably researched and documented." Martin Sieff (chief political correspondent for United Press International)

American Conservative: "No one is spared in Bovard's merciless review... Bovard's chronicle of the whole sad history of the war on terrorism, from Reagan to Bush I and through the Clinton years, is a tale of appalling incompetence." (Justin Raimondo, September 22, 2003).

"Bovard takes on the Ashcroft-Ridge-Bush 'security'apparatus, rips into it, and rips it apart. His weapon is facts, not mere rhetoric and opinion... If the world has any sense, Terrorism and Tyranny should reach the millions who've supported Bush while closing their eyes to what this holy crusader for the police state is actually doing to their country." Claire Wolfe, author of The State vs. The People

Antiwar.com: ""The most important book since 9/11... Anyone interested in the War on Terrorism must read James Bovard's newest book... He has constructed with precision and scholarly excellence a narrative of all that Bush has done since 9/11 in the name of fighting terror." (Anthony Gregory)

Syndicated Columnist Charley Reese: "If you want to know what is really going on in President Bush's War on Terror, read "Terrorism and Tyranny: Trampling Freedom, Justice, and Peace to Rid the World of Evil," by James Bovard. What is so valuable about Bovard's work is that it is just plain, fact-based, footnoted reporting. He is not a polemicist, and you will find no shrill arguments, no straw men, no rants, no name-calling such as you find in most of the quickie political books that people grind out these days. Instead, you get a sober recitation of the facts set within a philosophical framework that exactly matches that of the Founding Fathers." (September 8, 2003)

Publishers Weekly: "Bovard... looks at the post-September 11 policies and actions of the government and finds them sorely lacking.... Meticulously documented... May well leave readers as angry as its author." (August 25, 2003)

"Bovard's new book, Terrorism and Tyranny, is like his many other exposés of government power and corruption: clear, dispassionate, factual, and heavily documented. He is the Joe Friday of political analysis: Just the facts, ma’am. And the facts will make your blood boil." Richard Ebeling, The Freeman: Ideas on Liberty, November 2003

Bookreporter.com: "The gallows humor of James Bovard, a bright fellow with a sharp wit, helps to underscore the more outrageous blunders and miscalculations that have been committed by the several intelligence communities and law-enforcement agencies, the opportunistic power grabs by high-ranking bureaucrats, and the heavy damage inflicted on the Bill of Rights not by terrorists, but by friendly fire from both the Justice Department and the White House, all under the banner of defending freedom. Bovard finds much that he considers ridiculous and he does not shrink from ridiculing it.... The chief value of this book rests on the author's reporting, not on argument or interpretation..." His sources are credible and his presentation, except for an occasional sarcastic comment, is objective and straightforward. Every item of information is properly declared and accounted for in 68 pages of endnotes." (Prof. Harold Cordry)

"The book is so provocative, in so many ways, and so right on target.... It is a wonderful book... I think this is Bovard's best by far." David Brudnoy, WBZ Boston

"Bovard is an investigative journalist nonpareil. You won't find speculative flights into unsupported conspiracy theories, only hard reporting of documented facts gained through indefatigable legwork.... Bovard's got the goods... The only thing to be said is: Read the book!" Sheldon Richman, Foundation for Economic Education

"Never content to follow the mass media and focus solely on the minutiae of an important question, Bovard explores and analyzes the bigger picture... namely how Americans let themselves get dragged into what appears to be a never-ending war on terror, how politicians have used fear of terrorism to dangerously expand the power of the federal government, and the extremely serious threat to life, liberty, and property that the exercise of this power poses to citizens of the United States and to those of other countries." Former CIA analyst Jim Grichar, LewRockwell.com

"This is an awesome book.... There is no filler - every page is ‘need to know information.'" Doug Basham, KLAV Radio, Las Vegas

"I really like [Terrorism & Tyranny] because it describes how utterly inept the U.S. is in sustaining a war on terrorism." Jan Mickelson, WHO Radio, Des Moines

Denver Post: "Claiming allegiance to no political party, the author has taken on big government, former Presiden Clinton and now is after President Bush, the war on Iraq, homeland security and what he calls the end of liberty. He asserts the government is exploiting the terrorist threat to deprive us of our personal liberties." (November 30, 2003)

"It is a good read. It leaves you scratching your head. It puts you between a rock and a hard place." Nationally-syndicated talk show host Ken Hamblin