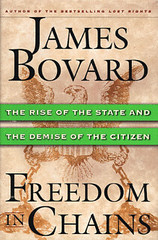 There is no way to criminalize our way to utopia.

Government is ourselves - armed with clubs.

Paternalism is a desperate gamble that lying politicians will honestly care for those who fall under their power.

There is no trigger guard on political ambition.

The people must be subdued before they can be saved.

The first duty of today's citizen is to assume the best of government, while government agents assume the worst of him.

The quest for a political mechanism to force government to serve the people is the modern search for the Holy Grail.

The fiction of majority rule provides a license to impose unlimited controls on the majority and everybody else.

Each law enacted in a momentary panic is a permanent conquest of new territory for the State.

The Night Watchman State has been replaced by Highway Robber States - governments in which no asset, no contract, no domain is safe from the fleeting whim of politicians.

So much of political philosophy throughout history has consisted of concocting reasons why people have a duty to be tame animals in politicians' cages.

Politicians are more anxious to control citizens than to protect them.

The defects in any system of choosing and anointing rulers outweigh the risks of letting people run their own lives.

The surest effect of exalting government is to make it easier for some people to drag others down.

The growth of government is like the spread of a dense jungle, and the average citizen can hack through less of it every year.

Trusting government nowadays means dividing humanity into two classes: those who can be trusted with power to run other people's lives, and those who cannot even be trusted to run their own lives.